Conditioned inhibition of the phototactic response in honey bees: a novel protocol for the study of learning and memory

Conditioned inhibition of the phototactic response in honey bees: a novel protocol for the study of learning and memory
2nd CRCA Phd Students Symposium – Program

The honeybee (Apis mellifera) constitutes a well-established invertebrate model for the study of learning and memory. Bees have the advantage of exhibiting robust learning and memory in immobilized preparations in the laboratory. The olfactory conditioning of both the proboscis extension response (PER) and the sting extension response (SER) are two excellent examples of standard, controlled Pavlovian protocols used in bees for the study of appetitive and aversive olfactory learning and memory, respectively.
Studies on visual learning and memory have been mostly restricted to an appetitive dimension as free-flying bees can be easily trained to choose visual targets paired with sucrose reward. Yet, laboratory protocols allowing the study of visual aversive learning are scarce. Here we introduce a novel aversive conditioning protocol in which freely moving bees confined within an experimental arena in the laboratory learn to associate a spectral light with an electric shock. In our setup, a flat arena was divided in two halves, the bee was allowed to explore freely both compartments under dark conditions (red-illuminated). When the trial begins, the place where the bee was found remained dark, while the other was illuminated with a spectral color (green or blue). Sides were pseudorandomly varied during training. Entering the illuminated side as a consequence of innate phototaxis was followed by an electric shock delivered through bottom and ceiling grids in contact with the bee’s body. Bees that learned the color-shock association progressively started to avoid the illuminated side when the light was switched on. Learning was robust and led to the formation of mid-term (2h after training) and long-term memories (24h after training). We discuss the potential of this novel protocol for studies on aversive visual learning in bees and define future research questions for this learning form. Dr. Maria Eugenia Villar is a Post-Doc in Pr. Martin Giurfa´s lab at the CRCA in Toulouse. Her research focuses on the mechanism involved in long term memory formation in the honey bee, Apis mellifera. In particular, she aims to elucidate the validity of the behavioral tagging hypothesis in an invertebrate model, the honey bee. She received her Ph.D. in Biology Science from the University of Buenos Aires in 2016. During her Ph.D, she investigated the promotion and interference mechanisms in object recognition memory. She has broad experience in behavioral studies in mammals, particularly in pharmacological studies of conditioning, learning and memory in rats. Now she has extended her studies to the honey bee. 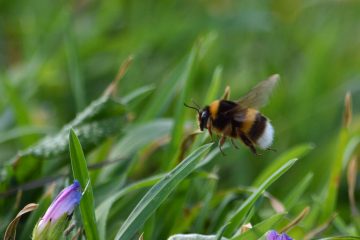 Evidence of trapline foraging in honeybees